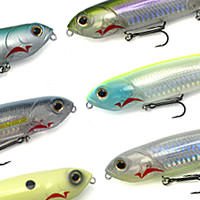 May 6th in Previews by Branson Werner .

Just announced this week, Paycheck Baits brings back a popular topwater bait from the Reaction Innovations arsenal. It’s nice to see two companies get along and share their success. But, what do we think about this bombshell for the bass fishing world?

Bub Tosh is up to his magic again. This time his bait is called the Repo Man. This topwater bait is the same one originally marketed and made popular by Reaction Innovations under the name Vixen. In fact, it uses the same mold. The first store to carry the topwater bait is Bass Tackle Depot. Also available at Tackle Warehouse.

Measuring in at 4.75 inches, and weighing 3/4oz, the new colors are the brainchild of designer Hydeki Maeda.

I can personally attest to the popularity of the Vixen. I own 4 of them and they were very hard to find (especially in bone), but worth the cash. I’ve consistently caught nice bass on the Vixen, especially from the early to late summer.

The Repo Man is a topwater stick bait and has a walk the dog side-to-side action. It’s very easy to walk the dog, with minimal effort with this bait due to the internals and design. This baits unique rattle is what sets it apart. It features both internal glass rattles and tungsten rattles.

Lastly, the Repo Man currently comes in 6 colors, a couple of which you have probably seen before in the Vixen line (Baby blue, bone crusher).

You can get more information and purchase the Paycheck Baits Repo Man online at Bass Tackle Depot or Tackle Warehouse.