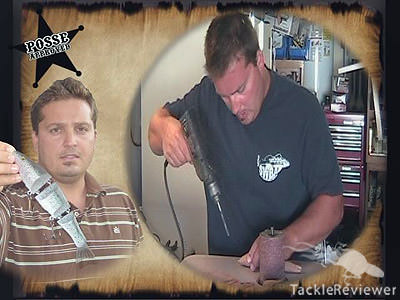 Sick of the typical fishing videos, the boys at Bass Akwards assembled some of the best in the biz, tied on some swimbaits, and headed to California. What they came back with was filmed and released in a DVD titled Big Bait Posse. The 40+ minute video is decked out with a punk rock soundtrack to help wake up the house.

Right from the get-go, you know the Posse is blazin full force. The vintage looking menus and DVD cover showcase these young guns in a whole new light that fishing hasn’t experience before. Not only does Bass Akwards expose viewers to the whole swimbait craze, but they also do it in a way that hasn’t been done before on video.

Fight a big largemouth in California

No more of that “this is how you tie a knot” crap, this is real side of fishing. Posse Members are Shaun Bailey, Mike Iaconelli, Matt Newman, Justin Kerr, Paul Bailey, and Dave Holoubek. Byron “The Bachelor” Velvick, Mary Delgado, and Aaron Martens also get in on the action.

We realize that 95% of the fishing culture has probably never thrown a swimbait. Prepare yourself to learn how from the Posse. This isn’t an instructional video, instead this shows what happens when you unleash some of the best California swimbait fisherman, and film them in their element. 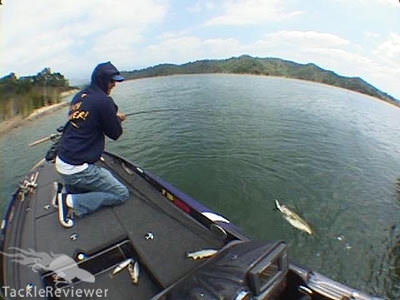 Matt Newman with a LARGEmouth at the boat

The DVD is sectioned into each member of the Posse showing off their skills. Catching HUGE bass. Of the easily 40+ bass caught at Casitas their isn’t one fish in this video that is under 6lbs. These monsters attack huge 8″+ swimbaits, and it’s all caught on film. Music for the video is in sync with the action that’s going on. Punk Rock bands Antagen, Lagwagon, Ignite, Sicker Than Others, and Raised Fist.

These trophy hunters dont use the small baits.

We had the chance to talk to FLW Pro, and Posse member Shaun Bailey about the DVD. He states that they “had the idea (to make a video) for a while and the group wanted to do something like this together“. When asked about filming, Shaun says “we were able to get video easily. In fact, we got too much“. The whole DVD was spread out over “the course of a year, and combined 50 days of on the water footage”.